Groups and teams are similar in that they are a conversation with a group of users, but they do have some differences as well. A team is a great place to have a conversation around a specific task, project, or topic, while groups are used for more ad-hoc messages, similar to direct messages.
There may be times where you start a group conversation and realize that it’s better suited as a team. In situations like this, instead of creating an entirely new team and losing your conversation history from the group, you can convert that existing group into a team. This allows you to keep your conversation history.
Note: When you add a user to a group, a new group will be created and the conversation history will not show.

Converting a group to a team for desktop or web

1. Navigate to Message via the left-hand navigation bar.

3. Click the More icon in the right-hand corner of the conversation header bar. 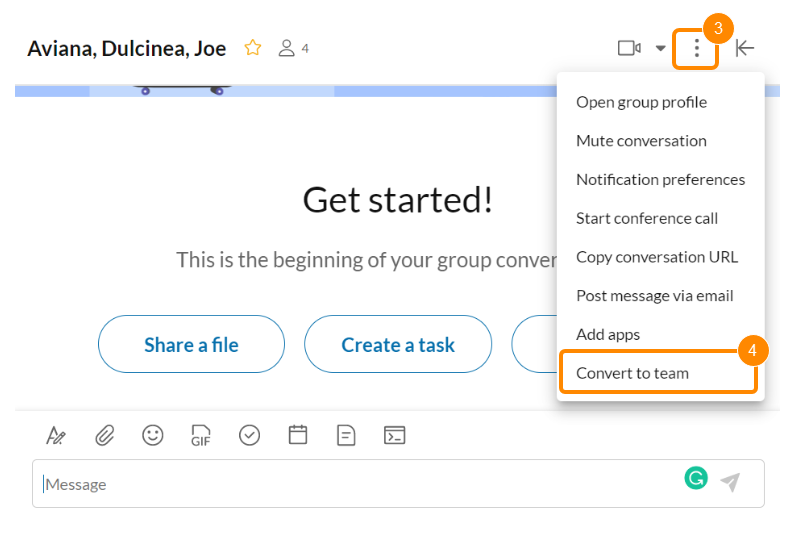 5. Give the team a name via the Team name field.
6. Select Convert to team.

Once you’ve converted a group to a team, that team will appear under the Teams section in the conversation list. You can make any changes to the team’s setting via the team’s profile. Visit Understanding a team's profile in the RingCentral app desktop and web to learn more.

Converting a group to a team for mobile

Once you’ve converted a group to a team, that team will appear under the Teams tab in the Message menu. You can make any changes to the team’s setting via the team’s profile.
System Status
Legal
Cookie preferences
Privacy Notice
Contact us
© 1999-2022 RingCentral, Inc. All rights reserved.
Thanks!
We've sent you a link, please check your phone!
Please allow a full minute between phone number submissions.
There was an issue with SMS sending. Please try again. If the issue persists, please contact support.