One of the workforce integration options available to you is Aspect Workforce Management. Workforce management software helps you optimize agent productivity within your company. Aspect helps you staff your contact center with enough employees — with the skills to answer customer questions — as interaction volumes change throughout the day.
Aspect uses the actual workload history to forecast future workload for each fraction of the day and calculates how many staff are needed to handle the work during each of those periods. Using this calculation, Aspect generates detailed agent work schedules.
You can configure your account integration with Aspect via the Integrations page at the account level. To reach this page, navigate to Settings > Accounts via the left-hand navigation bar, select an account to edit, and click the Integrations tab in the configuration panel. The Integrations page allows you to select the type of workforce management (WFM) integration you’d like to add to your account. This article will help you configure workforce management integration with Aspect.

When you integrate with Aspect WFM, Engage Voice will periodically collect and send real-time and historical data to Aspect for use in Aspect’s own reports and analytics capabilities. The component of Engage Voice that collects and sends the data is referred to as the WFM integration server.
The real-time data including agent states are then sent from Engage Voice to Aspect as a TCP/IP stream. Aspect, in turn, uses this data in its Real Time Adherence analysis feature. Additionally, periodic reports are uploaded from the WFM integration server to an FTP server where the reports are accessed for use by Aspect’s reporting features.
The data that Engage Voice will send to Aspect includes the following historical or real-time data in Aspect:

Engage Voice will periodically send files to Aspect Workforce Management to report inbound and outbound activity. For both inbound queue and outbound campaign activity, there are two reports: a basic report and an average positions staffed (APS) report. APS is an important input in calculating adherence. Adherence, which compares APS to required staff, is the measurement used by Aspect to evaluate performance at each site. The basic report and the APS report are also known in Aspect as the TCSDATA and SGDATA reports, respectively.
The basic and APS reports provide similar metrics but use different rules for aggregating data. The basic report aggregates data in an Engage Voice queue group for reporting as an Aspect contract group. By comparison, an APS report aggregates data in an Engage Voice agent group for reporting as an Aspect agent group (called a staff group).
The following table shows how Engage Voice metrics map to Aspect metrics in historical contact reports. Note that there is not an exact match between every Engage Voice metric and Aspect metric. Certain Engage Voice metrics must be modified or operated on so as to present the data for the corresponding Aspect metric. 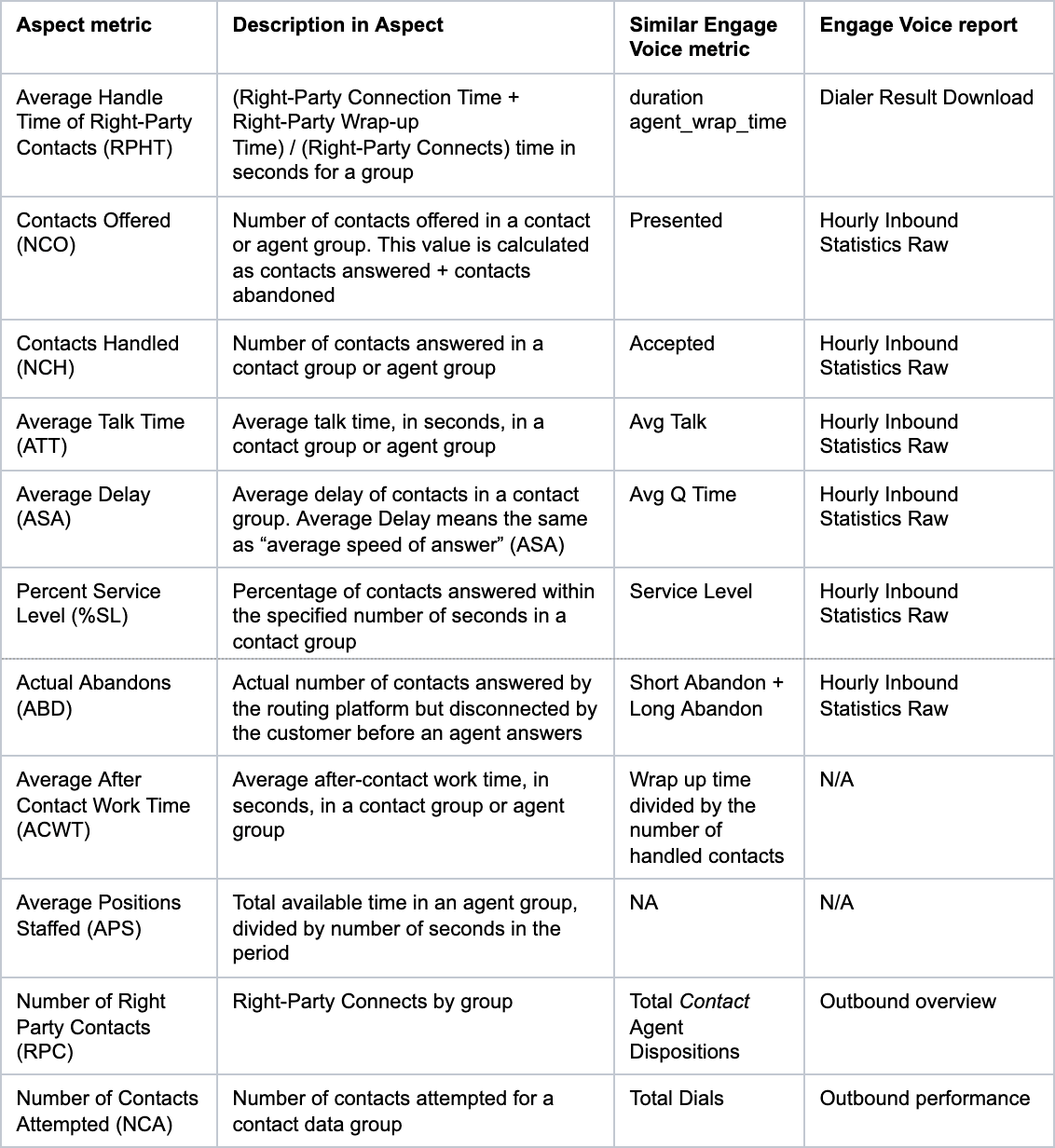 To understand the data that Aspect integrates and reports, contact Aspect for a data integration specifications guide.

Engage Voice uses a TCP/IP socket based communication to send a real-time stream showing agent states, which Aspect uses to calculate adherence to a schedule. Agent states are simply status notifiers that allow users to see what an agent is doing. For more details, see Configuring agent states on an account.
The agent states that can be reported through the real-time stream include the agent-triggered states that are available for selection by an agent in the agent console, as well as system-triggered states that are assigned either automatically or by a supervisor. The WFM integration only uses default Engage Voice states. If you configure custom states, a reporting entry will only be generated for the default state when a custom state is mapped to a default state.
The Real Time Adherence (RTA) feature in Aspect allows you to measure and report agent activity. The following table shows the mapping of Engage Voice states to Aspect codes and states. For information about the RTA feature, see the Aspect documentation. 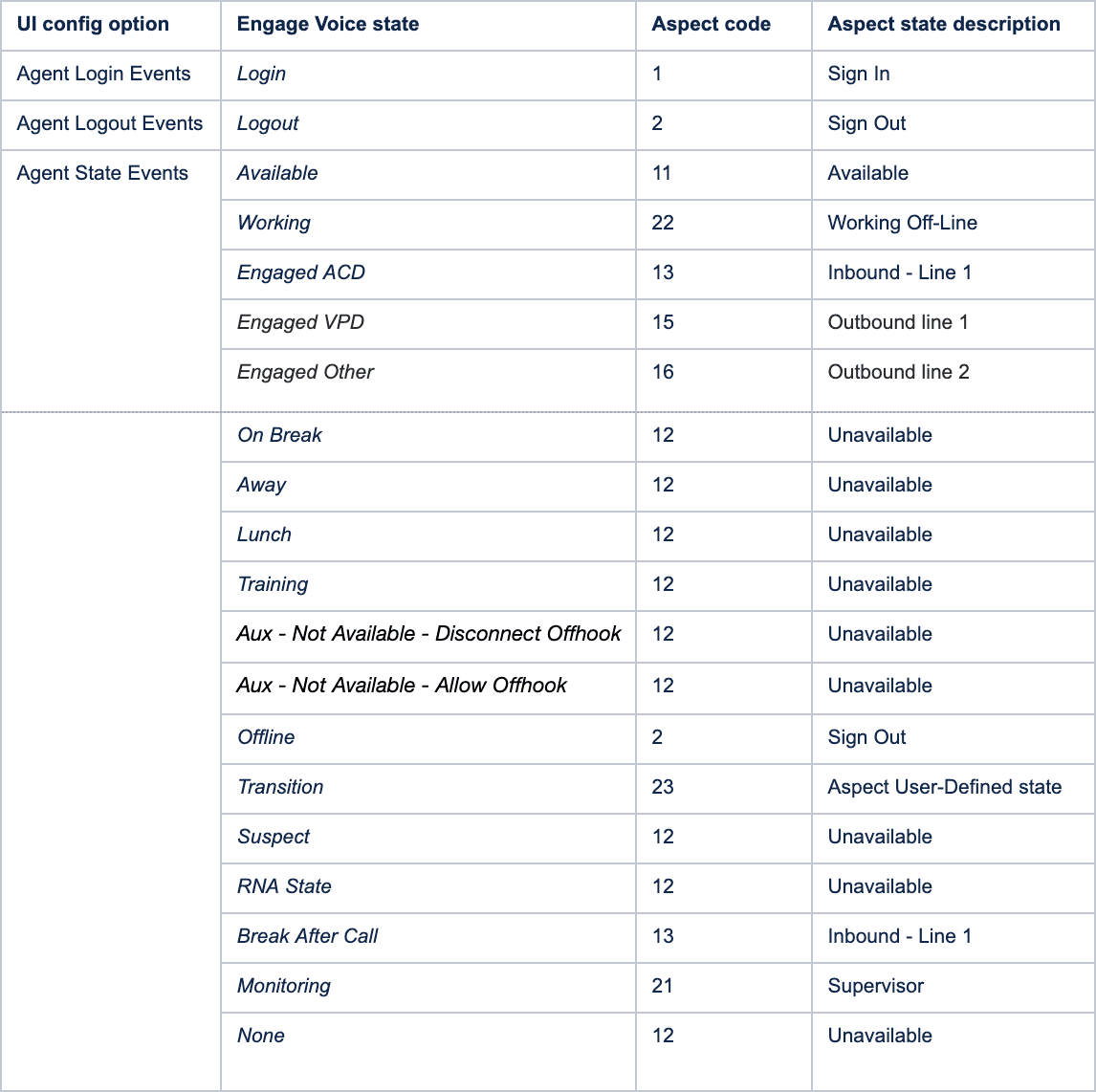 To add a new Aspect integration, follow the steps below.
1. Navigate to Settings > Accounts via the left nav bar
2. Select an account
3. Select the Integrations tab from your account’s configuration panel
4. Select Aspect from the Type dropdown menu
5. Specify the UDP Host and Port Number for the WFM integration server
6. Specify the TCP Host and Port Number for the TCP host used for real-time TCP/IP streams
7. Specify which of the events you want to report
8. Specify the FTP Host, FTP Port Number, FTP Username, FTP Password, and FTP Path
9. Select Send All Agent States if you want this option
10. Don’t forget to click Save at the bottom of your screen