As we discussed in Intro to Routing mode, Routing mode allows you to check what to prioritize since your messages are grouped together according to their workflow status. Interactions are routed to agents based on how they are configured in the admin interface and according to agent competencies and level of urgency.
When a new interaction is received, it will first route to the Ongoing folder, and at that point the agent will get an alert that there’s a new interaction. When the agent accepts the interaction by clicking on the chat, the message thread will pop up in the middle panel.
Keep in mind that accepting incoming interactions in a timely manner is important. Your administrator may set a time limit for accepting interactions via the admin interface and any missed interaction will affect agent productivity. If set by your administrator, the notification for an awaiting interaction will no longer be visible once an awaiting interaction times out.
If there are inactive messages in the Ongoing folder, you will be alerted with a pop-up that the interaction has been inactive. You can declutter the Ongoing folder by choosing to defer that interaction to a later time, transfer it to another agent more capable of solving the interaction, or completing the interaction.
You can also use your message action items to perform interactions. It’s important to be familiar with these action items so you can respond to customers and categorize their messages efficiently. Let’s discuss the message action items available for you in Routing mode.

Let’s review some of the message action items you can access in Routing mode. The following options may or may not be available to you, depending on how your admin configures your permissions.

Now let’s discuss how to accept an awaiting interaction in Routing mode. Before you can reply to a customer message, you need to assign that message to yourself. Once you are alerted about an awaiting interaction in the left pane under the Ongoing folder, you can simply click on the message to accept the interaction. The interaction status will change to Ongoing case once accepted.
Each interaction has a status indicating whether it has been processed or not. Once you accept the interaction, the message status changes from New to Assigned. In this way, it prevents other agents from working on the same message. You can check the status of a message by hovering over the message near the agent initials.

Follow these steps to accept an interaction and respond to a message:
1. Navigate to Routing mode via the left-hand navigation bar.
2. In the Ongoing folder, click on the awaiting interaction to accept and open the message thread in the right panel.
3. Enter your response in the message window at the bottom.
4. Click Send.

2. Click on the selected message to open the message thread in the middle panel.
3. Below the message field at the bottom of the screen, click on the Reply assistant feather pen icon.
4. Insert a keyword in the message field or select a reply from the list.
5. Click Send.
Another way to use the reply assistant is similar to what you can do in Inbox. You can simply insert a keyword in the reply text box and the preformatted message autofills for the corresponding reply.

If this feature is enabled and your role has permissions, you can request a collaborative browsing session with a customer, which allows the customer to share their screen with you while chatting to solve a problem. This feature is available for Engage Chat or Engage Messaging channels in the Live Chat or Web modes. For Engage Messaging, cobrowsing is available from web browsers only (both desktop and mobile).
You typically discuss with the customer the need for a collaborative session before initiating a request. During a cobrowsing session, a customer can share most screen elements with you including images, videos, text, and canvas. Elements on a page with a shadow DOM, a third party iframe, or other content excluded by your admin cannot be shared.
To request a cobrowsing session with a customer, follow these steps:
1. Navigate to Routing mode via the left-hand navigation bar.
2. Click on the selected message to open the message thread in the middle panel.
3. Advise the customer that you will be requesting a screen sharing session with them.
4. Below the message field at the bottom of the screen, click the Cobrowsing screen icon.
Once the customer accepts the invitation, you will see the customer’s screen in the right pane. Cobrowsing tools such as Take control and Highlight can be used during the session. You can continue to chat with the customer during the session using the left chat pane.

Using cobrowsing tools during a session

Once a session is established between you and the customer, you can use the Take control or Highlight tools by selecting these icons in the upper right corner of the session window.

If you have the corresponding permission, you can easily consult with an Engage Digital expert to address difficult customer concerns. In addition to the permission, to use this feature, your company’s Engage Digital domain needs to be associated with a RingCentral account ID, and you must have access to that account.
To use this feature, follow these steps:
1. Navigate to Routing mode via the left-hand navigation bar.
2. Hover your mouse cursor over the customer message with which you need help.
3. Click on the three-dot icon that appears. Click Ask an Expert.
4. In the Ask an Expert modal window, select the name of the expert you need to contact.
5. Enter your question in the modal window. Be as specific and as brief as possible. You are limited to 300 characters.
6. Check Share message history to send a transcript of your conversation with the customer along with your question. This will copy up to the previous 20 messages in the conversation. (optional).
7. Delete any messages in the message history that are not related to your question if you did step 6. You will not be able to do step 8 if there are more than 1500 characters in the message history. (optional)
8. Click Send.
9. Check the RingCentral app to view the expert’s reply. 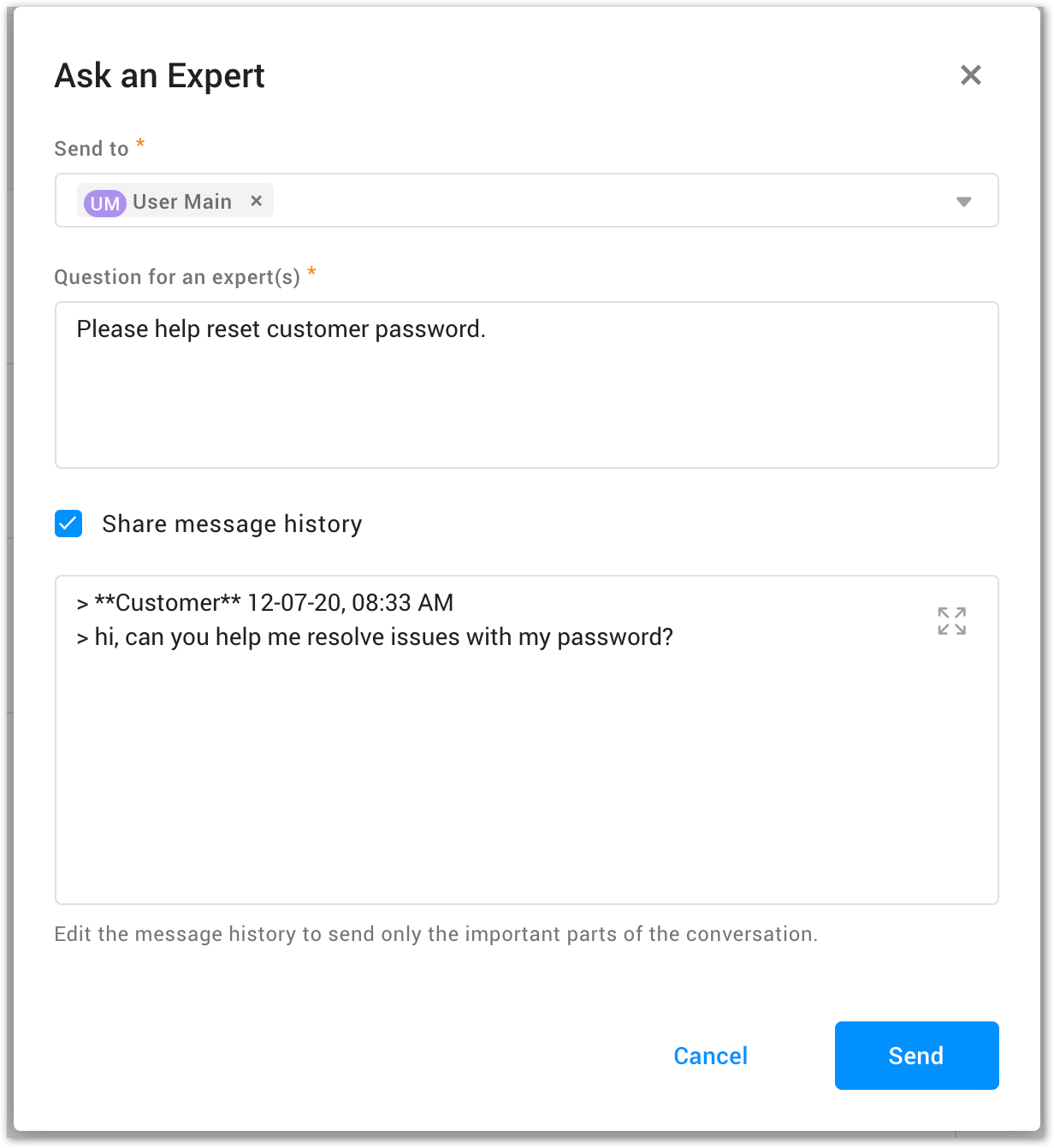 The shared message history has the following limitations:

If you have the corresponding permission, you can print or save a copy of the entire message thread. You will usually do this only when an authorized person who does not have access to the platform requests a copy of the thread. To access this feature, hover your mouse cursor over the top bar of the thread window then click on the printer icon.
This feature has the following limitations:
The printed copy will appear as follows:
Before printing a thread, check the print preview window to ensure that the printed copy does not contain private information.

If no disposition is needed and Smart Conversation Close is not enabled, once you click Complete, the message will close and a pop-up message with a prompt that says ‘Interaction complete’ will appear.
If no disposition is needed but Smart Conversation Close is enabled, when you click Complete the system will automatically ask the customer if they have other questions or concerns. The customer can choose to answer using two buttons, Yes and No. If the customer chooses Yes within the allowed waiting period, the system will automatically ask the customer for more information about their new question or concern. You must then continue the conversation. 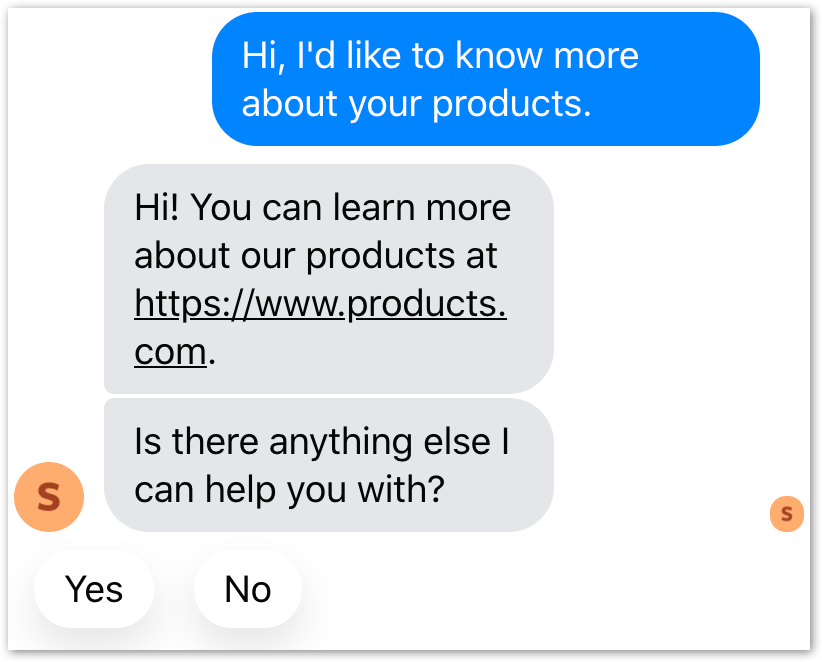 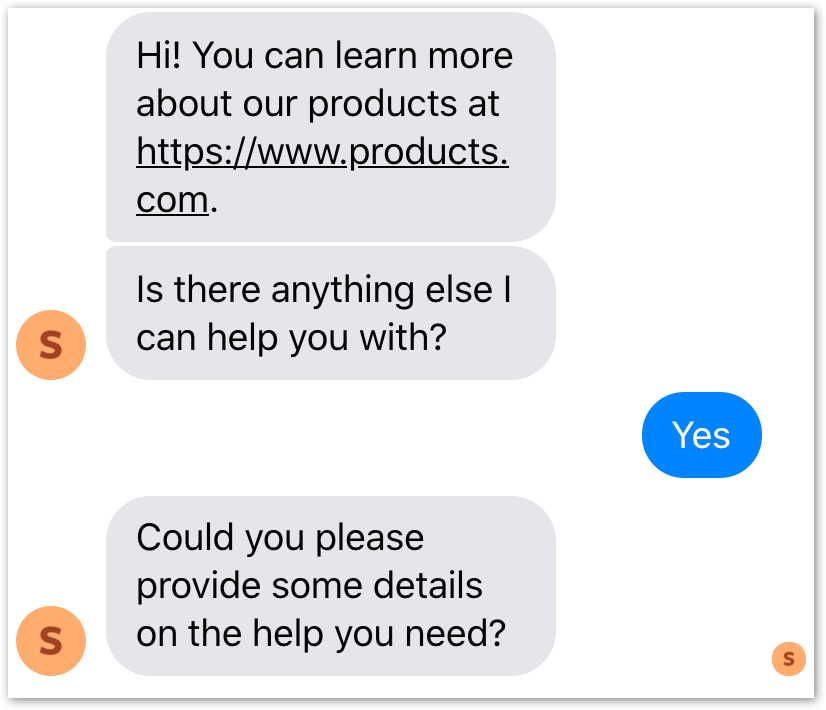 If instead of choosing Yes or No, the customer sends a reply within the allowed period, the system assumes that the customer does have other concerns and has provided details. In this case, the system will no longer send the second automated message and you must continue the conversation. 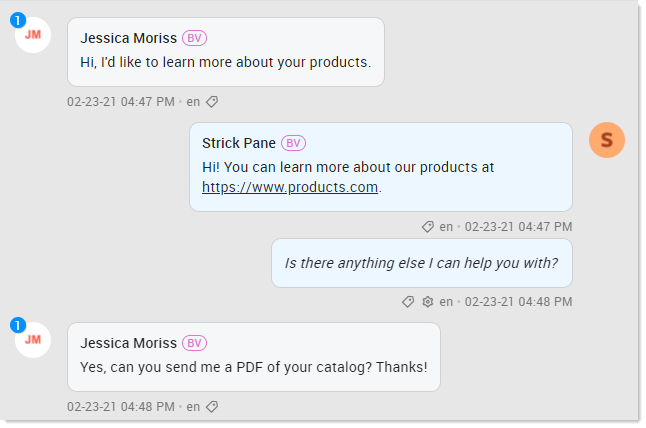 If the customer chooses No or does not reply within the allowed period, the system will automatically mark the conversation as completed. 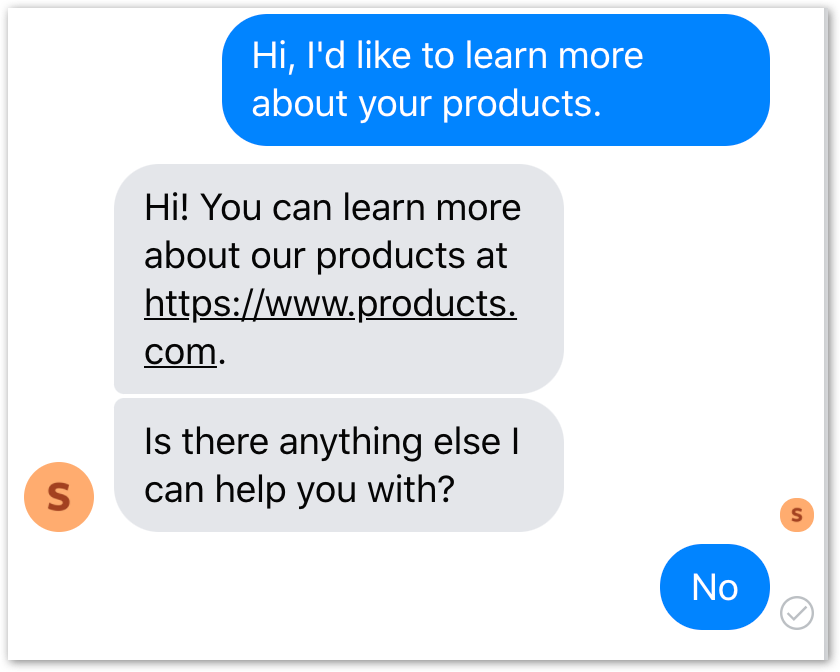 If in any case you need to get back to a message you already marked complete, you have an option to resume that interaction. To do so, navigate to the History folder, hover your mouse over an interaction, and then click on the Resume rightward arrow inside a square icon.
Next
Estado del sistema
Aviso legal
Preferencias de cookies
Aviso de privacidad
Contáctenos
© 1999-2022 RingCentral, Inc. Todos los derechos reservados.
Close X
Thanks!
We've sent you a link, please check your phone!
Please allow a full minute between phone number submissions.
There was an issue with SMS sending. Please try again. If the issue persists, please contact support.